An Australian national sporting organisation for people with disability is taking the lead on a holistic approach to building the skills, knowledge, and behaviours that children need to lead healthy, happy, and active lives.

Today’s environment and increasingly sedentary lifestyles mean many children are missing out on learning fundamental movement skills, such as how to run, throw, kick, catch and jump.

This prompted Sport Australia, the Federal Government agency responsible for supporting and investing in sport, to develop the Australian Physical Literacy Framework, which it launched last year.

Physical literacy means developing the skills, knowledge and behaviours that give people the confidence and motivation to lead active lives.

These include its Young Athletes and Inclusive Sport in Schools programs.

Young Athletes is an all-abilities program in which specially trained coaches guide children under eight through play-based sessions that teach movements they will use in sports and daily life.

Young children also develop the social competencies they need to be active with others, such as asking for help or taking turns. 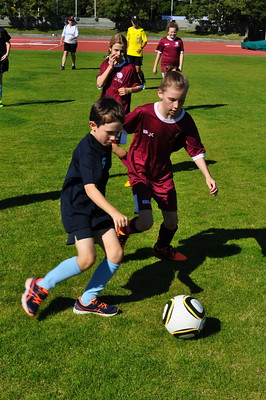 Special Olympics Australia’s Inclusive Sports in Schools program supports teachers and community coaches to effectively include students of all abilities in physical education within schools.

“A targeted, methodological approach underpinned by the Australian Physical Literacy Framework develops children’s knowledge, positive attitudes and behaviours related to being active – focusing on acquiring physical skills alone does not.”

“Evidence is coming thick and fast to show that a physically literate person is more active, so a deliberate approach to increase children’s physical literacy is key to improving Australians’ physical activity participation over the long term.”

Inclusive Sport in Schools is currently being piloted across New South Wales through Federal Government funding, with national rollout planned.

Murray Elbourn, CEO of Disability Sports Australia, says having a standardised, national school sport program in which students with physical, sensory, or intellectual disabilities can participate will lead to more effective inclusion of people with disability in sport.

“The future of inclusion shouldn’t be something we have to do or remember, the box that we have to tick, it should just be seamless.”

Both the Young Athletes and Inclusive Sport in Schools programs are designed so that children with and without disability can participate together.

Comis views integrated programs that can be adapted to participants’ needs and abilities as the future of inclusive sport.

“The future of inclusion shouldn’t be something we have to do or remember, the box that we have to tick, it should just be seamless.”

“Disability sport has an opportunity – through events such as Paralympics, Invictus Games and Special Olympics World Games – to achieve the coverage and recognition that women’s sport has reached in the past decade and create awareness and education.”

“That’s where the schools program works well – more people playing together, not segregated, will support talent identification, high-performance pathway growth, and production of Australian athletes who get the opportunity to showcase their talents.”

“But governments, community and sports organisations need to collaborate to make it happen.”

Nine national sporting organisations for people with disability including Special Olympics Australia and Disability Sports Australia are already working collectively to advance inclusive sport, through the Australian Sporting Alliance for People with a Disability.

Formed in October this year, the alliance organisations represent millions of Australians.

Elbourn says it is the perfect time for the new alliance to advance one school program that works for everybody.

A version of this article was first published on sportanddev.org as part of celebrations for 2020 International Day of People with Disability.

Special Olympics Australia strives to ensure that everyone living with an intellectual disability can participate in sport. We provide: